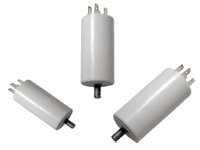 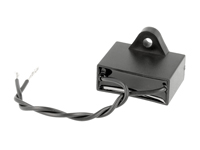 AC capacitors are used in motor starting, in lighting, and mainly to improve the power factor.

They are generally made of metallized polyester so they have high insulation resistance and the ability to withstand overvoltages by self-regenerating, not without it at the cost of suffering slight variations in their capacity. They have no polarity.

A start capacitor or start capacitor is an electrical element that alters the current in one or more windings of a single phase AC motor by creating a rotating magnetic field. The unit of capacitance of these capacitors is the microfarad represented in the capacitor by one or more numbers followed by µF or uF. Old capacitors may be labeled with the obsolete terms "mfd" or "MFD", which also stand for microfarads.

In order to compensate the power factor and the cos ϕ in electrical installations, lighting, ... they are also used. Power factor is the ratio of active power to apparent power. In linear loads this power factor (f.d.p.) and cos cos ϕ coincide, but in switched loads they do not. Non-linear loads create harmonic currents that generate a rate of harmonic distortion that in turn generates losses in the lines, a decrease in available power, the need to increase the section of the cables due to the voltage drop. That is why we find ourselves in the need to compensate the power factor and cos ϕ with the use of capacitor banks and coils that generally go into switching automatically.